One Month To Victory: Zoom Recording

Did you miss it? We hope not. But if so, we've got your covered! Our last "to Victory" happy hour event was last night and if you missed it or just want to experience the energy and excitement again, here's the video!

A huge thank you to the dedicated Commit To Flip Blue team Emily Blanck, Diana Doughtie, Molly Hermes, Annemarie Henning, Linda Carman, Judith Brown, Margaret Hegg, and Patty Mitchell. And much thanks gots to David Trounstine for producing the great videos, Aliza Metzner, Joel Schaffer, and Lauren Nelson for your help in running the event, and to ALL our superhero volunteers and supporters.

You are the foundation of our great country!

You will be heard this November! And you will do everything you can to steer America back down the path defined by her founding fathers!

It’s time for us ALL to be Notorious! 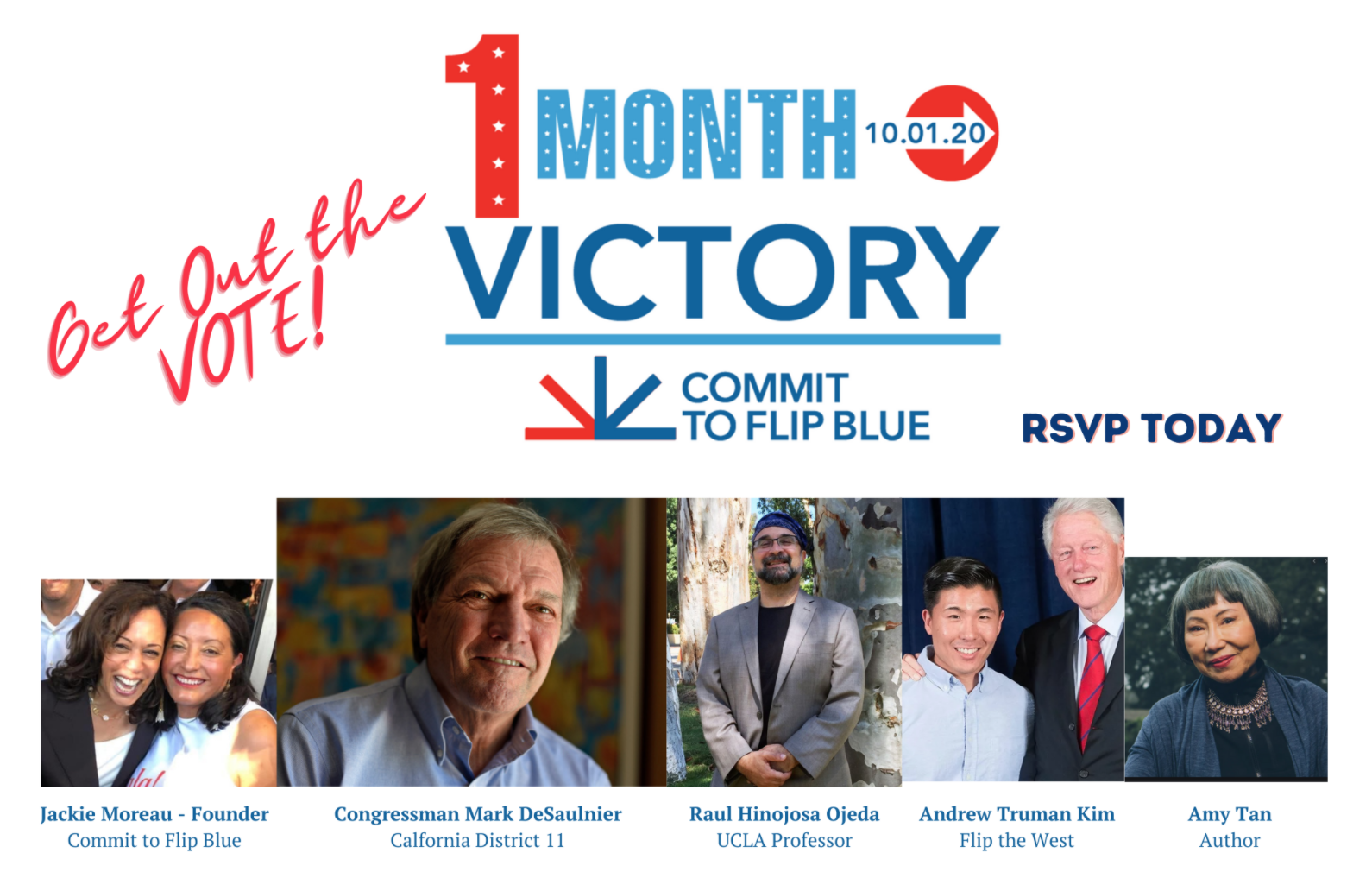 Every month since June we've hosted our "to Victory" events to inform and hopefully inspire you to keep pushing with us toward the finish line. This was the last big push to help us Get Out The Vote and our last happy hour event leading up to Blue Victory in November when we regain the White House, flip the Senate and gain seats in the House of Representatives.

One Month to Victory event held via Zoom on October 1, 2020 with:

Jackie Moreau: is the founder of Commit to Flip Blue (CTFB), a feminist, an activist, and organizer. She is committed to flipping the Senate, changing the occupant in the White House, and holding the Blue majority in the House in 2020. In 2018 CTFB and so many other organizations helped create that Blue wave and we’re determined to keep going. A COVID-19 survivor, she lives in the Bay Area of Northern California and works tirelessly for the people.

Congressman Mark DeSaulnier: elected to Congress in 2014 and proudly represents California’s 11th Congressional District, which includes the majority of Contra Costa County. For more than 30 years, Mark has been a leader on issues of importance to working families including guaranteeing a livable wage, ensuring education is affordable and accessible, making investments in job training, and keeping good paying jobs here at home. Congressman DeSaulnier is one of only a few Members of Congress to serve on four committees: Oversight and Reform, Transportation and Infrastructure, Education and Labor. He also is a member of the exclusive House Committee on Rules, where he has the opportunity to weigh in on major pieces of legislation before they are brought to the House Floor for a vote. Additionally, Mark serves on the Congressional Progressive Caucus, where is he is a member of the Executive Board.

Amy Tan: Born in the U.S. to immigrant parents from China, Amy Tan grew up in the San Francisco Bay Area. In her 30s, she took up writing fiction. A year later her first book, a collection of interrelated stories called The Joy Luck Club was an international bestseller, and Tan’s life was changed forever. Her subsequent books, The Kitchen God’s Wife and The Hundred Secret Senses, have been bestsellers, and the film of The Joy Luck Club was an unprecedented success. At the height of her success, Tan was stricken with Lyme Disease. Although the infection went untreated for many years, she has overcome the devastating symptoms of this chronic illness and has continued to write bestselling novels, including Saving Fish From Drowning and The Valley of Amazement.

Raul Hinojosa Ojeda : the Founding Director of the North American Integration and Development Center and Associate Professor in the Division of Social Sciences and the César E. Chávez Department of Chicana and Chicano Studies at the University of California, Los Angeles (UCLA). Born in Mexico and raised in Chicago, he received a B.A. (Economics), M.A. (Anthropology), and Ph.D. (Political Science) at the University of Chicago. He is the author of numerous articles and books on the political economy of regional integrations in various parts of the world, including trade, investment, and migration relations between the U.S., Mexico, Latin American and the Pacific Rim.

Andrew Truman Kim: Field Director and Strategist for Flip the West. Andrew is a former congressional staffer, and former campaign manager for Congressman John Garamendi building a field team that reached over 1,000,000 voters in 6 months. He's been a campaign consultant for over 10 years and has recruited, trained, and managed over 1,000 operatives in congressional, gubernatorial and presidential campaigns. In 2018 Andrew managed a full-time call center that helped make over 500,000 calls in 2018 for the 7 Republican Congressional Districts in California that were defeated.

Please join us at Commit To Flip Blue to get out the vote in swing states. We're committed to taking control of the Senate, increasing the majority in the House, and reclaiming the People's House #ForThePeople
Join us!
#FlipTheSenate
#BlueWave
#VolunteerPowered
#SaveDemocracy
#GOTV
#Vote
#Resist
#Volunteer
#Organize
Do you like this post?
Tweet
VOLUNTEER EVENT SIGN UP DONATE